In a very disappointing development last night, Gino Kenny’s euthanasia bill passed second stage in the Dáil by 81 votes to 71.

A government amendment that would have delayed progress of the bill for one year, while a special committee examined the issue, was defeated.

It is extremely troubling to see a bill designed to facilitate the ending of human life pass second stage with such ease and without any meaningful debate or scrutiny whatsoever.

But all is by no means lost.

For one thing, the vote in the Dáil was close. Second, Gino Kenny’s bill still has to pass final stage and that vote will be months or even longer away.

In recent weeks, the overwhelming opposition of palliative care consultants and other healthcare professionals was publicly expressed. And the full-scale horror of what euthanasia has wreaked in countries where it has been legalised still has to be fully aired in the debate in Ireland.

Last night’s vote will be widely celebrated in the media and will be presented as evidence that Ireland is ready for a ‘liberal’ and ‘progressive’ euthanasia regime.

We can’t let the story end there.

There will be people all over Ireland, people living with a terminal illness and older people in particular, who will be frightened and downcast on hearing the news that a euthanasia bill is making its way through the Dáil.

We owe it to them not to adopt a defeatist approach. This is the very moment when we need to find our voice and speak up and defend the most vulnerable in our society.

To those who sent e-messages or made phone calls to politicians in recent days, your efforts have not been in vain.

We can stop the Kenny bill from passing final stage in the Dáil but we have no time to waste. Wherever you are reading this message from, I encourage you to commit to getting active in your area on this issue today and join the effort to stop euthanasia from becoming a reality in Ireland. 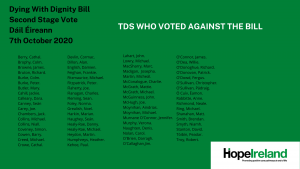 No donors yet. Be the first!

Hope Ireland is a coalition of medical professionals and disability rights advocates who aim to bring informed perspectives to the debate around euthanasia and assisted suicide in Ireland.

Your ticket for the: 08.10.2020 Euthanasia Bill Passed Second Stage in Dáil